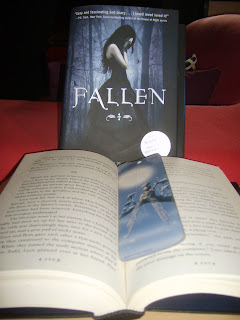 Goodreads : There’s something achingly familiar about Daniel Grigori. Mysterious and aloof, he captures Luce Price’s attention from the moment she sees him on her first day at the Sword & Cross boarding school in sultry Savannah, Georgia. He’s the one bright spot in a place where cell phones are forbidden, the other students are all screw-ups, and security cameras watch every move.
Even though Daniel wants nothing to do with Luce–and goes out of his way to make that very clear–she can’t let it go. Drawn to him like a moth to a flame, she has to find out what Daniel is so desperate to keep secret . . . even if it kills her.

My opinion : I was very eager to read this book mostly because of it's gorgeous cover ... At first, I was a little disappointed in Fallen : the beginning is a little slow ... Actually , I've needed 300 pages to really get into it ... but it was worthy ! WAOUH, I loved this story of fallen angels (I didn't even know that it was about angels when I bought it) the war between them (the good and the bad ones), Luce's reincarnations ... The love story between Luce and Daniel is so cute !! Daniel Grigori is such a sweetheart !!  I can't wait to read Torment in order to have my DG's dose .. The thing that I did not enjoy about Fallen is the fact that this mysterious thing around angels (even if she has some dreams about it) and Luce's previous lives arrive all of a sudden. I mean that I'd have liked the author to lead this in a different way ... But  the fact that the mysteries of the book are resolved this way makes sense, because it's actually what made me want to read Torment so badly (Even if I think it's kind of weird) !
Luce Price is sent in this new school, named Sword & Cross, after the death or her boyfriend. She feels immediately a connection with Daniel Grigori (a mysterious ang gorgeous guy). She has this feeling, like she knows him from somewhere ... And she does : every seventeen years, Luce begins a new life and every time she falls in love with Daniel. I really loved this reincarnation thing and especially the passage page 357 when Daniel retraces Luce's different lives and each time she has realized the truth. I have to quote it because I had to read the excerpt like four times because I thought it was so cute and romantic :
"And yet, you know in your heart it's true [...] You knew it when I followed you to the top of Corcovado in Rio, when you wanted to see the status up close. You knew it when I carried you two sweaty miles to the River Jordan after you got sick outside Jerusalem. I told you not to eat all those datesi. You knew it when you were my nurse in that Italian hospital during the first World War, and before that when I hid in your cellar during the tsar's purge of St Petersburg. When I scaled the turret of your castle in Scotland during the Reformation, and danced you around and around at the king's coronation ball at Versailles."
I didn't write the whole passag, it's a lot longer ...

Quotes :
As I said, what I liked the most was the third part of the book so I've only taken quotations from this one !!

"I can resist you or flee from you or try my hardest not to respond to you, but it makes no difference. You fall in love with me, and I with you". Daniel to Luce Page 352
"I'm in love with an angel". Luce (this one is better when you read the whole passage)
"It made Luce want to stand up next to him and fight. Fight to stay alive long enough to live out her life next to him. Fight for the only thing she knew that was good enough, noble enough, powerful enough to be worth risking everything. Love." Page 448
I'm such a love addict ... It's kind of creepy because I've just noticed, the main part, of the quotations that I pick for each book are always about love and even kind of "clichés" sometimes !!

My advice :
You may not be excited by the beginning of the novel, but you have to keep reading and you might be surprised !!

You can leave the link of your review of Fallen, it'd be a pleasure to take a look at it !! As you might have noticed, I'm not a great reviewer and since I'm French, it's even more difficult for me to write my reviews ... Reading yours would be an awesome practice for me ;) !!
Posted by Elodie at 12:57:00 PM 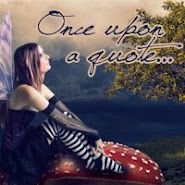